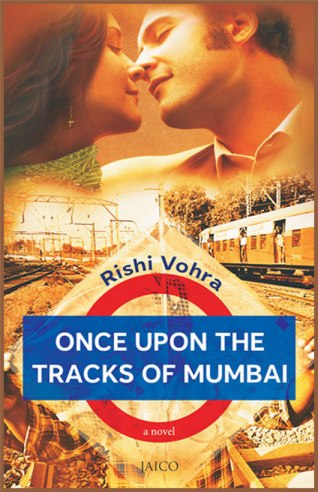 Book: Once Upon The Tracks of Mumbai

There is something of Everyman in this book. The protagonist is an autistic, schizophrenic, psychotic in words of everyone around him. Whereas deep down he is a brave man, who has ideas but no means to implement them. He is disturbed because of not been accepted by his family but brave at heart. He wants a change but fails to get it under his own identity. He is Balwant Srivastav a.k.a. Babloo.

As what the title and the cover photo suggest, this book is well based in Mumbai and upon the Tracks of Mumbai. Vohra, takes his readers onto a ride where he explores Mumbai- from slums to BEST buses, ambitious people to political gangs, films like villains to real lives like police to fascinating characters of superman and shaktiman.

Apart from the protagonist we have other characters too who play an important role in developing the whole story. Vandana- She is portrayed to be like a typical Indian person. She is been made to think about all the bullshit we are told about west. West is this and west is that. The other side of Vandana is that little-mean attitude that we tend to see in most of the people. She tries to take all the advantage she can from Sikander. In him she sees ‘Bank of America’.

Vandana had read a lot about America in books and was totally enamored by the country. She was fascinated by the fact that the freedom of thought, and action was a way of life there.

Sikander is a typical loafer-like character. Who knows well how to woe women and take benefit out of them.

Raghu is one of those male-chauvinist pigs you end up finding somewhere or else. Not to mention that he fell in love with his ‘Would-be’ wife in first meeting only.

There must be something else behind the story,’ said Raghu. “If she were from a decent family, she wouldn’t’t be out all night. She probably deserved it.

Vohra does an awesome job with Babloo’s character; he manages to bring out his different shades beautifully and later lets the reader to judge. Babloo’s character is well-researched and same goes for other characters. Vohra must have done an extensive research in developing these characters, which is commendable.

The middle-class-family-connection is very prominent in book; Vohra manages to describe 1BHK flat that a usually middle class family lives in perfectly. On the other hand he managed to potry ‘sheer-racisam’ that exists in a middle class family along with Raj Thankrey like characters in few of the instances:

But the saying was true that you can take a bhaiya out of UP but you can’t take UP out of a bhaiya.

The narrator in book switched way to rapidly. One paragraph you have a third-person narrator and just the next line we see Babloo speaking. One has to have smooth transition between one narrator and other narrator which obviously was missing.

The book is meant for all age groups, especially those from Mumbai because eventually they would find ‘something’ of themselves in this book. The story as I mentioned is fresh, but fails to generate interest after one point of time. One has to push himself way too hard to read further. It is sometime drastically monotonous. The best part of the book is the kind of details Vohra has mentioned. The way he takes his readers through Mumbai, it is clear and sometime mesmerizing.

Kudos to the author for attempting to write a book. This is his first novel. No questions that Vohra is a good story-teller. And this book leaves the reader with a gist of reading something of themselves.

Final Words: This book can be read on a lazy weekend; especially when you are bored of reading all-same-like-love-stories. This book will not disappoint you.

About Rishi Vohra: He recently relocated back to Mumbai after completing a Green MBA from San Francisco state university and a Masters Diploma in Environmental Law, prior to which he has had a successful career in the Indian entertainment industry.Have been a guest columnist for various newspapers in India, he currently writes for delWine and is a Certified Specialist of Wine. This is his first novel.

Aditya Bhasin hails from India, Delhi-an avid reader, who enjoys his cup of tea over it, a racist in purest form as he hates chocolate and coffee. He does not like traveling much, but, if he gets an opportunity to travel he chooses to do that by a train instead of a car or a plane. He is an ambivert person and is happy that way.

This book was sent to me by author for an unbiased review. If you are a publisher or author and would want me to review your books, please drop an email at : adityabhasin [81] @ gmail [.com]

2 thoughts on “Book Review: Once Upon The Tracks of Mumbai: Rishi Vohra”

Error: Twitter did not respond. Please wait a few minutes and refresh this page.